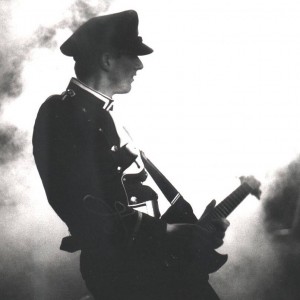 By 文章 Gavin Blackburn 音乐记者
视频：Lydia Mcaulay 造梦社
翻译 Translation：Han Shu 王涵澍
For anyone thinking of working in the music business, Mark Reeder's career reads like a Linkedin tick-list.
He cut his teeth working in Virgin Records flagship Manchester store before moving to Berlin in 1978 where he was the Germany rep for the now legendary Factory Records.

He went on to co-manage all-girl outfit Malaria!, toured with New Order in his band Shark Vegas and, after the fall of the Berlin Wall in 1989, founded the first ever dance music label in former East Berlin, MFS. He even found time to produce the last ever pop record released in East Germany (Torture by Die Vision), show John Peel around Berlin for his Travels with my Camera documentary and discover superstar DJ Paul van Dyk. As one of the earliest pioneers of the 90s EDM sub-genre trance, it's little wonder that a recent Smirnoff Wall of Sound documentary described Mark as “The Godfather of the Berlin Music Scene”. Throw in a handful of remixes for the likes of Pet Shop Boys and Depeche Mode and a couple of albums of his own and you'd think he'd be happy coasting into retirement with nothing left to prove. That might have been the case until a chance conversation in 2013 not led to the creation of “B Movie: Lust and Sound in West Berlin 1979-1989”, a documentary looking at the music scene in a divided Berlin which has – perhaps surprisingly – gone on to become one of the biggest critical successes of his career. How did the idea of B-Movie come about?

The basic idea for B-Movie was born out of a conversation between Heiko Lange and producer Joerg Hoppe. They wanted to make a doucumentary about the Berlin scene in the 1980s, but Joerg didn’t want to make a traditional talking heads documentary. His idea was to make a jigsaw of images set to 80s music. He asked me if I would be willing to restore the music that he wanted to use in the film so that it would sound good in the cinema. Because I had just released a surround sound album, ‘five point one’, he asked me if I could reconstruct the music in 5.1 too.

During our conversation, I suggested I send him some footage that I had of the time that I had made but never watched. I sent him my footage and didn’t hear anything back for two days then he called me and asked me round to talk. This feeling of fear suddenly hit me and I was thinking, ‘Oh God, what did I give him?!’

He had watched my footage and come to the conclusion that I should tell the story from the point of someone from that scene, as a Brit in Berlin during the 80s and all the things I experienced as it would give the film a more personal touch. Was there any particular story you were keen to tell with the movie?

Not really, as up until that point I had no idea that my life could be remotely interesting to anyone. For me it was just my daily life. I have come to realise since that I have experienced quite a lot and I have so many stories that I probably wouldn’t know where to start.

How much of B-Movie is social document and how much is your personal journey through those days?

It’s nearly all my personal journey in one way or another. The images provide the social document. It shows a walled-in city, the very idea of which sounds dreadful, but it presents a picture of how a small group managed to weave around the obstacles and what this group of creative people managed to achieve under such circumstances.

The period the film covers pre-dates cellphones where everyone can photograph and film every minute of their lives. How difficult was it tracking down footage for the film?

I had lots of footage to start with from the TV programmes I had done for British TV or Swedish TV and a few movies I had appeared in and luckily I knew most of the local filmmakers, so much of it was quite easy to obtain, especially when someone like our mutual friend Knut Hoffmeister arrived with two suitcases full of Super8 footage. The difficulty was finding the images that matched the story.

The media has created this image of West Berlin which would have us believe there was punk in every club, Bowie was in every record store and there were spies on every corner...was it really like that?

Of course not.  There were a few clubs and bars, Bowie had left and the spies were everywhere. Berlin was vibrant, but the the scene was very small. We were a handful of people all interacting with one another.  New bands would appear at every event, but in reality it was always the same people under a new guise.

Living your day to day life back then, were you aware you were part of a "scene" that would be being talked about all these years later?

When you are part of a scene that is in the process of evolving, you never ever think about things like that and especially back then, we never thought of the future, because we all thought we would die in a nuclear holocaust. In retrospect, it all looks pretty straightforward. I was part of a scene and today we can look back and reflect on the impact it made on the music world. Back then we never considered it, it was just being creative. I guess if we had, we would have had more film and photos from that period. West Berlin in the 80s certainly produced a number of interesting, experimental bands but how influential have they been on music?

Only three bands that I can mention have really had a truly lasting influence on the international art and music scene; Einstuerzende Neubauten, Malaria! and Die Toedliche Doris. They are like the holy trinity of the Berlin avant-garde scene. Neubauten were totally unique and original, choosing to perform with trash and old building materials rather than traditional instruments. They undoubtedly influenced bands like Depeche Mode to change their musical style. Malaria! were an all girl avant-garde band who didn’t adhere to the rules of male dominated rock and roll and they made a huge impact in both Berlin and New York and all over Europe, with their special sound, while Die Toedliche Doris were more performance art with musical accompaniment.

Have you seen anything in the clubs and bands in China that reminds you of those West Berlin days?

I’ve only had the pleasure of seeing one club so far in Chengdu and they played punk all night. It was a bit nostalgic and very entertaining but nothing new. On the other hand I have found a very unique Chinese band here. I have recently been working with a fantastic local band called STOLEN and it’s my belief that they are on their way to achieving great things for China.  As for a West-Berlin feeling? To be honest, I get more of a Manchester vibe from Chengdu than the feeling of West Berlin. In West Berlin there was a very different ideology behind the reasons for making music. We were a very small music scene with a handful of people. In Berlin people didn’t make music to escape, as they had already escaped to West Berlin, they simply made music to express themselves, and that made the music sound very different, desperate and unconventional, whereas in Manchester you made music because you had to, it was the only way out if you wanted to escape the boredom and misery of everyday life.

And what's next for Mark Reeder professionally?

I have recently finished my new album Mauerstadt (it means walled-in city), which will be released at the end of May. It features collaborations with new artists like The KVB, Ekkoes, MFU, Maja Pierro and Queen of Hearts, as well as exclusive mixes that I made for Inspiral Carpets and New Order. The title addresses the theme of boundaries and walling people in but it also refers to the walls in your mind too. I also have been asked to put together the follow-up to B-Movie, about my life during the techno years in Berlin during the 90s running a record label.