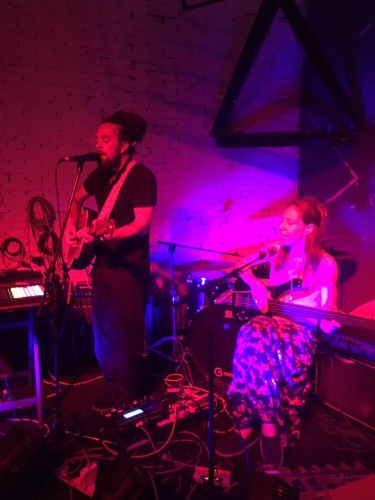 Two weeks ago at Steam Hostel’s anniversary party, like so many times before, your music grabbed me from outside, from the bar, from mid-conversation and dragged me to the dancefloor. I felt a few tears pricking my eyes as I listened to “Wonderful”. I looked over at Steam Hostel’s Mao Mao, standing next to me and he gave me a little nod. I felt like he understood. Goodbyes are so complicated. We started talking about what Proximity Butterfly means to us - also a complex topic. Mao Mao’s thoughts on the matter are that your music is meant for much more than here. He wants to see you gain more fans, the reputation you deserve and reach an audience that can deeply appreciate your lyrics. In the background as Josh sung, “Birds aren’t for cages and love goes through phases,” I realized that Chengdu, like so many places where you live for a long period of time, has been the many phases of love but also a type of cage. I turned to Mao Mao and said, “I hope one day we’ll look back on this time and proudly say, 'Proximity Butterfly started out in Chengdu.'” Standing below the stage, my ears, my body, my senses became absorbed in your music and I realized, I don’t know a Chengdu without you. 8 years ago when I moved here, you were already here. Before the birth of WeChat, I used the usual old school forms of finding music in the city. At the time Lonely Planet had an entry on Hemp House and that served as my initial guide to discovering the Chengdu music scene. Floating in the centre of the dancefloor was little Atheria (your eldest), learning to dance and walk at the same time, accompanied by Umbrella the dog. After the gig finished everyone, sweaty, piled out onto the balcony, to soak in the breeze and conversation of summertime Chengdu. Back in those days, so many memorable evenings at the Hemp House seemed to roll into one. Those were the days when the scent of summer seemed somehow stronger than today, or at least in my memory. Sometimes I feel like time in Chengdu has gone through a vacuum. Especially in the last few years, when I think back to how things were and how things are now, the change seems immense and yet I don’t remember the period of change itself. It’s like going on a journey and falling asleep in the car to wake up in a new place. However, on the road I have some really precious memories of bumping into Proximity Butterfly’s Heather and Josh. Like at the opening party of Panda Club in the East Music Park 2011. I met you both outside, beer in hand, Umbrella on leash. Seemed kind of funny to bring your dog to an electronic club but you seemed happy, one of you going in to party the other outside keeping the dog company. 5 Chunyous (A Spring music festival put on every year by Morning House) have passed by in the time you’ve been here. I remember one Chunyou a few years ago I hadn’t seen you around in a while and then the explanation came in the form of twins. Then there was one Nuart Festival where Lisa and I caught those same twins wreaking havoc on the tree behind the stage, having a dirt fight while you were packing up your equipment. On the Medusa tour in Chengdu’s new (big) Little Bar at Wanxiangcheng, the gig was really amazing, you collaborated with the Sinostage dance troop, combining music with dance which was a really nice touch. I was outside scanning tickets for our website and running inside in between to watch. When the gig was over and we’d finished talking we realized that the Wanxiangcheng shopping mall had already closed and your car was parked in in the parking lot. We went on a wild adventure together through the back doors and halls connected to Little Bar, carefully avoiding the security guards until we found the elevator to the parking lot. A couple of years later at a different gig, a friend of mine had his bag locked inside and I was able to retrace the same route we took that night to help him get it back. We haven’t always been good friends; I used to be that stranger, beer in hand, swaying on your dancefloor. Looking back I think zaomengshe played a big part in us becoming friends. In 2014 for zaomengshe’s first anniversary party I plucked up the courage to ask if you would perform. I’ve always liked your music and I really wanted it to be part of the celebration. I was so honoured when you said yes. You hired a babysitter for the night and backstage after the gig you told me that you were happy to support our website. It really meant a lot to me. At the 4th anniversary of Steam Hostel that night, supposedly your last gig, (but I hoped it wasn’t) when it got to the last bar of the last song, I didn’t want it to end. I was the first person to yell ‘encore’ and everyone quickly joined in.

"I so believe" you’ll do well in Canada. Moving to a different place, changing how you view things, a new life and a new perspective will undoubtedly provide a whole new world of inspiration for you and for your music. But, as someone who has never known a Chengdu without Proximity Butterfly, I have to say … “Soon I will miss you.”