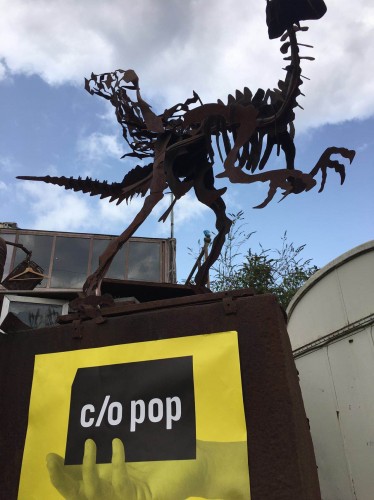 We rode into C/O pop on the coat tails of Electronic legend Ni Bing, who'd been invited as a China music representative VIP to the festival. We arrived kind of late on the night of the 17th, the festival had started two days earlier. We weaved through a thick crowd following Ni Bing to the heart of dance floor. Cologne Tape, an epic complication of local talent ranging from various musical backgrounds.


8 accomplished local musicians filed on stage, a knowing nod coupled with a glance shot from one end of the stage to the other and with that the keys kicked off a melodic riff swiftly followed by guitar and then enhanced further by flitter of clarinet.
Ada a well known electronic artist was methodically rocking her head inside her half tilted head phones, which gave an subtle hint to the two drummers to her left. The sound of the bass walking like the sound of the quickening pace of a heavy boot on a wooden floor.
Layer upon layer they led us through the evening, mesmerised in a trance that didn’t break until the first shout of “encore” flew from the back corners of the audience. C/O pop is a cologne based festival that’s been running for 13 years now. It’s proudly backed by the local government and lovingly put together by Ralph Christoph and his team.
This year zaomengshe.com was lucky enough to have the opportunity to attend.
The festival consists mainly as networking and showcasing event. Giving organisations from all over the world the opportunity to come together and share what’s going on in the industry. For me the highlights were a blockchain panel, where experts in the area discussed potential applications for blockchain in sites that support the music industry. Aside from panels, discussions, networking and great concerts, we were taken on an easter egg hunt style tour of city, poking our heads in various studios and make shift venues to watch brief showcase concerts by Germany’s up and coming young bands. My personal favourite was Ilgen-nur, who we watched in a magazine studio, their stage was the office and we stood outside in the courtyard. Framed by 70s wooden windows, the tough female 90s goth style Hamburg singer belted out the strongest first line I’d heard in a while: “You break my heart, I’ll break your spine.” Many thanks to C/O pop's festival organiser Ralph and his team for inviting us along, if you're over in Germany towards the end of August next year I would absolutely recommend checking out this festival.
1 Comment